The first half of 2018 saw a 10 % increase in accidents at pedestrian crossings than the same period of 2017. In the first six months this year, 438 pedestrians have been hit at crossings across the country.

The local council of Budapest 12th district has decided to launch a national traffic safety campaign in September 2018, just as the schoolyear is about to take off.

Most accidents were caused by carelessness or non-compliance with the rules. The most common causes are speeding, overtaking violations, the use of cell phones, and listening to loud music that distracts from traffic.

Some accidents could be avoided if pedestrians also paid attention to a few basic rules, as there are more and more occasions of pedestrians crossing against better judgment because a digital device distracts them from spotting the red light or an approaching vehicle.

These dangers and more are introduced by ZIZI, the teenage zebra girl and campaign figure of the municipality, now greeting children and their parents at the busiest hubs of Budapest on LED projectors, online interfaces, interactive flyersn and in many schools across the country.

Accidents at pedestrian crossings are common not only in the capital, but also in large cities in the country: in Debrecen, Nyíregyháza, Szeged, Pécs, Győr, Miskolc, there is a higher number than average of such cases.

In total, nearly 1,500 people have been hit at crossings across the country in the past year and a half.

Such an accident has also occurred in the 12th district, so the aim of the Municipality is to draw the attention of both motorists and pedestrians to the dangers and the rules of traffic. From September, the district police will also integrate some elements of the campaign into their awareness-raising work in schools.

“The start of the school year usually sees significant increases in pedestrian and vehicular traffic around schools. The 12th District Police Headquarters, in cooperation with the Hegyvidék Security Service and the Civil Guard, traditionally introduces complex measures for the safety of children in educational institutions. These measures include assigning traffic cops to help around schools and to raise awareness among students. Now with the initiative of the Hegyvidék Municipality and the help of some popular technical devices, children receive information about the correct way to move about even more efficiently”, - said István Sztanyó, Police Lieutenant Colonel, head of the 12th District Police Department.

To launch the campaign, the municipality set up an interactive gate at one of the busiest crossings in the district, right next to a school. The gate draws the attention of motorists to the pedestrian crossing from afar. It is important that they slow down and drive more carefully, and by no means overtake another car at a crossing! After completing a quiz on the tablets built into the pillars of the gate, pedestrians can watch five short educational clips about the hazards and proper behaviour on the road. The movie pillars of the interactive gate went on a tour after the press conference, and the Hegyvidék Municipality will hand them over free of charge to any school in the country that needs them. 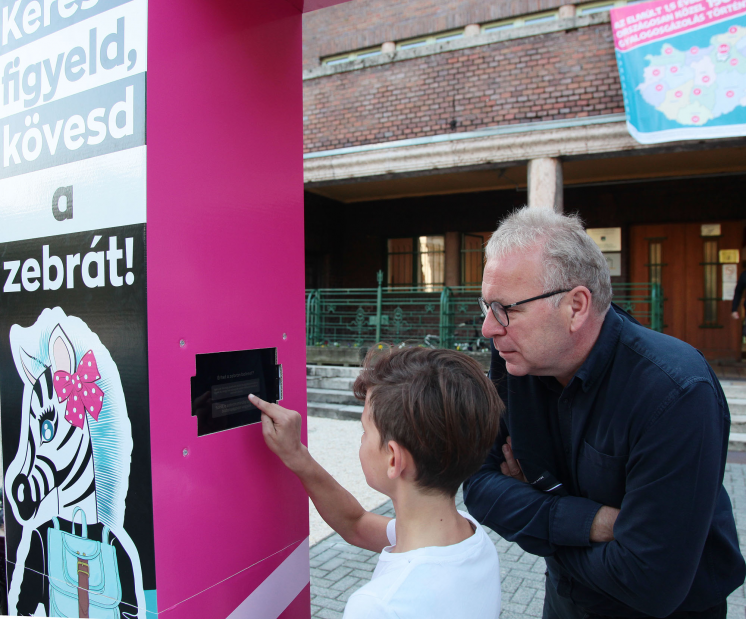 Mayor Zoltán Pokorni has already contacted several of his colleagues in the country and across the capital, as breaking traffic rules at pedestrian crossings is a problem in other districts as well as in other large cities in the country. The last such instance was a recording published in August, showing a car clearly committing an overtaking violation and hitting 3 children and an adult accompanying them at a crossing in Szentendre.

“Only a few hundred kilometres away – in neighbouring Austria, for example – motorists, almost surprisingly, clearly understand that pedestrians have the right of way at crossings. Even a small car weighs more than 1000 kg. With such a mass, there is no such thing as a minor mistake. We all took driving lessons that taught us that crossings belongs to pedestrians, somehow we still forget”, highlighted Mayor Zoltán Pokorni.

The campaign is also supported by László Nagy, a handball player living in the 12th district, who is himself a father. Mr Nagy wishes it were clear to Hungarian motorists, just like to those in the big cities of Europe, that pedestrians are king when it comes to crossings, and they should not have to thank motorists for letting them cross.

The Hungarian Ambulance Service also supports the campaign and believes it to be important. They had used viral clips in the past to make people remove earphones while on the road because it distracts from traffic and poses a hazard risk.

Pál Győrfi, a spokesman for the Hungarian Ambulance Service, said by telephone that nearly 15,000 traffic accidents resulting in personal injury occur in Hungary every year. Statistics are dry and meaningless until you, a family member, or possibly a young child, fall victim to such an accident. Paramedics face tragedies on a daily basis where the life of a person, or their family, is devastated in an instant. Accidents are preventable, so it is important that we all follow the traffic rules, refrain from flippant driving and overtaking, put down out phone while driving, and wear seat belts even on short trips. The safety of children is particularly topical in early September, which requires more attention on the roads as well as traffic safety education for schoolchildren. Let's take care of each other!

The Hegyvidék Local Council has had pedestrian crossings repainted at several busy junctions and crossings for the start of the school year, installed new traffic signs warning of pedestrian crossing, and installed 6 new speed displays near educational institutions. And to bring the interactive flyers to life, all one needs is a free downloadable app (organizers ask motorists to play with the device only after parking). 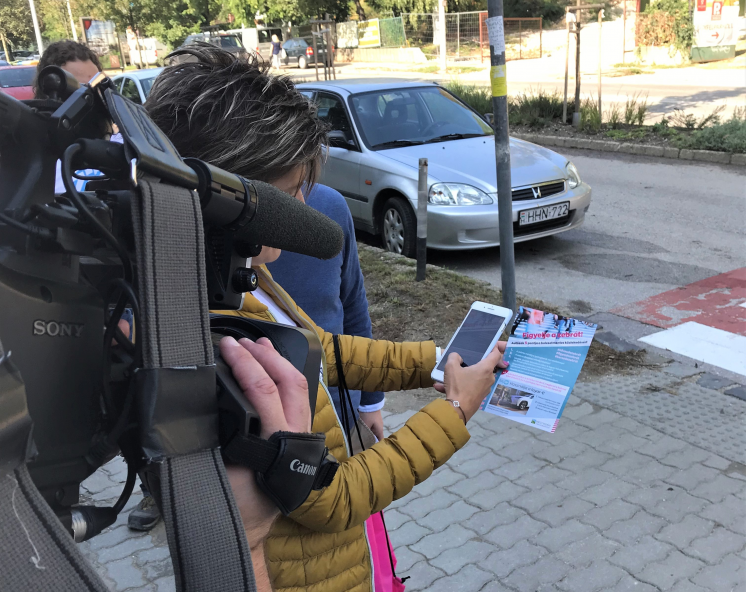 The campaign clips are also available on intranet channels at various public institutions in the district, as well as on the YouTube channel of the municipality.